posted by Rodolfo Piskorski
That's what McDonald's "chicken" sandwiches are made of. At least according to the little box the sandwich comes out of. Now they have the "ingredients" of the sandwich pictured around it, and there are two origami chickens standing in for the actual meat. I checked it online and found that Brazilian McDonald's had adopted the same boxes that are used internationally - so I guess this new box with fake paper animals can be found anywhere.

Not only in the boxes, but I found that there is a real advertisement campaign focusing on origami animals. 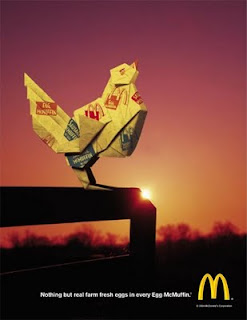 I do not really expect McDonald's to depict actual dead animals on their products or images, but I feel there is something almost outrageous in representing chicken as geometrically folded paper. Most food industry advertisement here in Brazil depict chickens as cartoons, happily trying to convince you to eat it.

In a different strategy, there was a fast food chain here that offered you the choice between beef or chicken by the means of a cartoon cow saying "Eat chicken," and a cartoon hen saying "Eat beef." That did not last very long. I guess most people did not like the fact that the cartoons were actually begging you not to eat them.

I believe this trend of exaggerating the effacement of the presence of animal flesh is part of the larger campaign in the fast food industry (as least as I can see it in Brazil) to "clean" its food of undesirable ingredients. I guess the first blow came with Supersize Me, and then from Linklater's Fast Food Nation, with its infamous quote "There's shit in the meat," made real by recent events. Now it seems there's an outright paranoia to rid fast food of seemingly "unhealthy," or plain gross ingredients. Here that includes selling all kinds of sorry-looking salads and R$1 apples.

But the turn towards origami chicken does look like the last and final move in this abstraction campaign. There is such a vague, clean and geometric appeal to origami which looks just insulting, both to chicken and to consumer. It's sad that the concern for the depiction of dead animals (as well as the notion that the costumers may not feel comfortable knowing they're eating meat) is inserted in this larger issue of eating habits and health problems — and not in a real discussion of carnivorism and vegetarianism.

I guess that in fact this kind of cultural pedagogy is just typical of McDonald's. Deep down, there is a strong connection between establishing the acceptability of invisible flesh and the truly neo-colonial gender identities they enforce when coming up with boys' and girls' Happy Meal gifts. Some time ago, for example, they were giving little alien robot toys for boys — the caption saying something like "alien supreme force, thrust, (insert phallic word here), etc." — and little dolls for girls (caption? "Sweet kisses"). In sum,  alien evil destructive machines versus dolls that blow kisses. 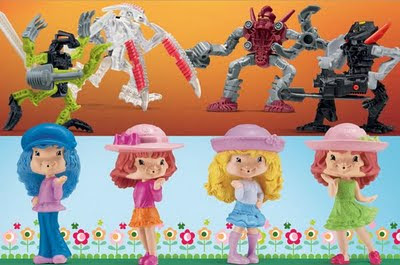 Unfortunately I couldn't find a picture of the poster they were displaying in the restaurant themselves, where the design, the color, the actual captions, and especially the way it was so furiously divided in two were the source of most of the shock. I was amazed by how well they could take such basic sexual stereotypes and distill them until they had nothing but the pure obnoxious dichotomy. Hand in hand with their campaign of hygienizing their food and their costumers from the view of animals.
Labels: animals, carnivorism, discourse